History of May Day

On 1st May 1886 labour unions in the United States of America decided to go on a strike. They demanded that workers should not be allowed to work more than 8 hours a day. The strike was followed by a bomb blast in Chicago’s Haymarket Square on the 4th of May. This incident also popularly known as the “Haymarket Affair” made May 1, one of the significant dates in history and was recognized to celebrate and honour the contribution of working men and women.

The protests in the U.S. also helped to establish the 8-hour workday norm in India and other countries in the world. Since then the 1st of May is celebrated as the International Labour Day (International Workers Day or May Day) in many countries across the world, including India.
However, in India, the very first Labour Day celebration in the country was held in Madras (Chennai), on 1 May 1923. A champion of workers’ rights and also one of the founders of the Communist Party of India, Malayapuram Singaravelu Chettiar launched the Labour
Kisan Party of Hindustan on this day. 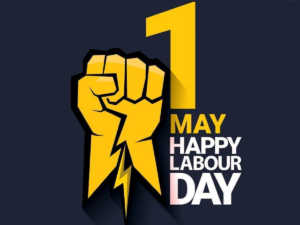 May Day – A Global Day

In Chicago, the USA, a union of workers had announced a general strike in 1886 for an 8-hour workday. The strike had turned violent. To control the crowd, the policemen started shelling. Bombs were thrown into the public. Many workers were killed and a few were injured. An overseas movement started with marches and uprisings happening annually on International Workers’ Day after a few years

Why is Labour Day celebrated in India?

In India, Labour Day is referred to as Antarrashtriya Shramik Diwas or Kamgar Din. Labour Day has its origins in the labour union movement in the United States. At the peak of industrialisation at the beginning of the 19th Century, industrialists used to exploit the labour class and made them work up to 15 hours a day

Peter J. McGuire, a carpenter and labour union leader, was the person who came up with the idea for Labor Day.